Kevin and Colin go to a proclamation

There have been many comedy duo acts throughout history, Laurel and Hardy, Morecambe and Wise, Ant and Dec to name but a few and now the happy duo of Kevin and Colin. Colin Rogers is the WM and Kevin Croft the immediate past master of Blackpool Lodge of Integrity No 5864 meeting at Blackpool Masonic Hall. 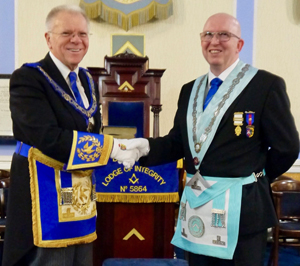 Such is their friendship that they instinctively know what the other is about to say, unfortunately their instincts are usually wrong especially during a ceremony. The Provincial Grand Master Tony Harrison tells us to enjoy our Freemasonry and these two certainly do.

The routine business of the lodge being dealt with, the eagerly awaited proclamation ceremony commenced with the director of ceremonies Joe Codling retiring from the lodge for a short time then returning to announce that Assistant Provincial Grand Master Derek Parkinson demanded admission. Derek was escorted into the lodge room accompanied by Blackpool Group Chairman John Turpin and other distinguished Provincial grand lodge officers.

Welcoming Derek to Lodge of Integrity, Colin hoped that he would have an entertaining day and offered him the gavel of the lodge. Derek graciously returned it being assured that the gavel will be in capable hands for a second year.

Proclamations are, in their simplest form a shortened version of the installation ceremony. But Integrity lodge decided to commemorate the day by making it interesting and enjoyable for the brethren who had made the effort to attend by including everything required for an entertaining afternoon. This resulted in a most enjoyable day with the senior and junior members of the lodge being equally involved in the proceedings. 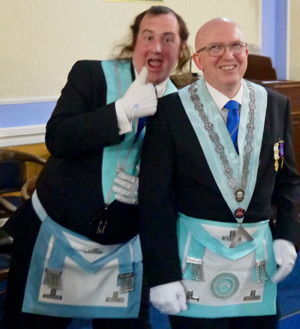 Kevin Croft (left) and Colin Rogers in a jovial mood

At the conclusion of the ceremony Derek was pleased to bring the greetings of the PrGM, wishing Colin good health to enjoy his second year as master of the lodge.

Colin then presented Derek with cheques to the value of £1000: £600 to the MCF 2021 Festival, for Freemasons, their families and the wider community, £200 to Blackpool Street Life which is an organisation that assists vulnerable young people in Blackpool and £200 to Blackpool Young Carers to assist young carers who have taken on caring responsibilities that would normally be expected of an adult. Derek thanked Colin and the brethren on behalf of the recipients for their magnificent donations.

Before the festive board commenced, Philip Alderson was presented with retirement gifts and an engraved tankard from the members to commemorate his 22 years as secretary of the lodge.

In replying to the toast to the grand officers Derek brought his own congratulations to Colin wishing him good health for the year ahead and congratulating Kevin as the proclaiming master for an excellent ceremony ably assisted by Joe Codling as lodge director of ceremonies and the officers of the lodge. 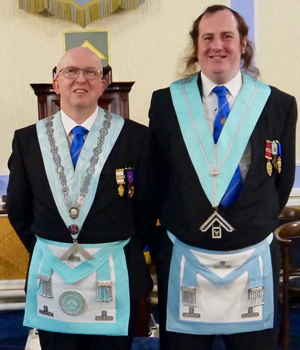 Thanking the lodge for the donation to the MCF 2021 Festival he informed the brethren that £48,000,000 had been given to non-Masonic charities and good causes during 2018. In addition to financial donations Freemasons gave 5,000,000 hours of unpaid time volunteering for good causes.

The WLFC gave £175,000 to Freemasons and their dependents last year, this year the amount is £340,000. This is the result of the criteria for qualification being changed. Derek urged anyone who may need assistance to contact their almoner or apply direct online. Loneliness can also a problem especially for the widows. The WLFC has given every group in the Province a grant of £2500 per year to subsidies a meal or transport to the event. Derek concluded by wishing everybody good health for the future.

One of the highlights of the evening is the master’s song, sung this evening with gusto by David Harrison accompanied by John Wall.

Kevin proposed the toast to the WM, adding that as Colin is the same master as last year, he will give the same speech as he did last year. Colin responded by thanking everybody for attending today adding that as Masons we should remember the main tenets of the order, brotherly love, relief and truth.

A nice tradition within Lodge of Integrity is the toast to the founders, which is given by the newest member of the lodge and on this occasion the toast, was given by their latest entered apprentice.

The evening ended with the traditional final toast to all poor and distressed Freemasons by the tyler. 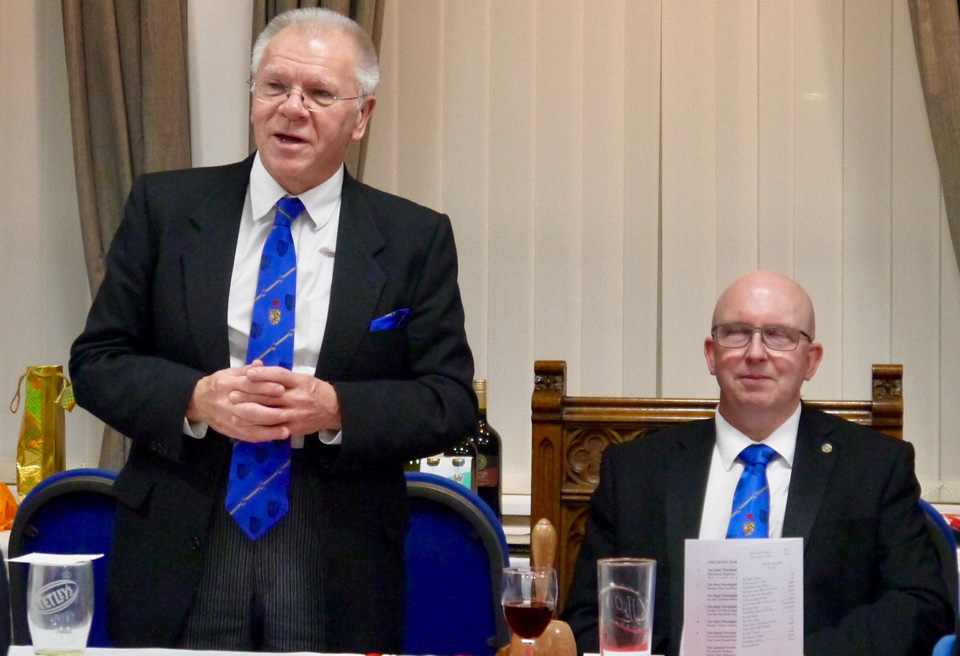 Derek Parkinson responds to the toast to the grand officers.