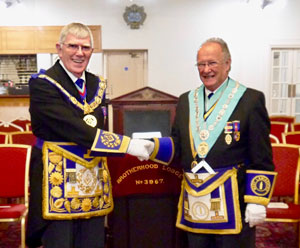 The lodge was formed to accommodate the large Jewish community in the town and would include both Christians and Jews who would be meeting on equal terms and would serve to promote the principles of Freemasonry, brotherly love, relief and truth.

Consecration of the lodge eventually took place on 20 November 1919 at the Hotel Metropole, Blackpool. Introduction of new members into the lodge was regulated to ensure that Christian and Jew alternated, to keep the balance of the faiths in the lodge in accordance with the principles of the founders.

It is a testament to the founding members that Brotherhood Lodge has maintained those principles and has survived 100 years of continuous working and continues to be a successful and happy lodge. This happiness was evident when 115 masons attended the Savoy Hotel to celebrate the centenary of the lodge.

After opening Provincial Grand Lodge, Tony explained that the purpose of the meeting was to celebrate 100 years of Brotherhood Lodge No 3967

Members of the Provincial team and distinguished guests.

Following the ceremony, Tony was pleased to receive from the WM cheques to the value of £3967. This being the number of the lodge. The recipients of this generous donation were; £1,500 to the Masonic Charitable Foundation Festival, £1,223 to St Annes Church for floodlighting, £311 to Brian House, £311 to Guide Dogs for the Blind and £311 to Prostate Cancer Research.

£2,650 of these donations was raised by the lodge treasurer Bill Hembrow, who in June and July of 2019 completed a sponsored walk known as the Camino de Santiago de Compostela pilgrimage walk, which is an almost 500 mile walk through Northern Spain from St Jean Pied de Port in France to Santiago de Compostela in Galicia, North West Spain.

Legend states that St James’s remains were carried by boat from Jerusalem to northern Spain where he was buried in what is now the city of Santiago de Compostela. The name Santiago in the local dialect translates as Saint James.

Bill asked for sponsorship for this to be split equally between the Masonic Charitable Foundation 2021 Festival and floodlighting for the St Annes Parish Church. Bill raised a magnificent amount of £2,650. At the Centenary meeting £1,223 was presented to St Annes Parish Church and £1,223 was presented to the Masonic Charitable Foundation 2021 festival. This was supplemented with £277 to take the festival donation up to £1,500, which gave the lodge Festival Patronage.

At the end of the ceremony, the brethren retired to the festive board to enjoy a fine meal and good company. In his response to the toast to his health, Tony congratulated the lodge on 100 years of uninterrupted working. Thanking those who had contributed to the life and work of the lodge this past century. A remarkable landmark for a lodge to achieve.

Acting Provincial Grand Tyler Peter Maxwell gave the final toast of the evening and everyone went home looking forward to the future of the lodge.

Members and guests enjoying the festive board.