Explanation of the Royal Arch tracing board

Senatores Chapter of Installed First Principals No 8966 was honoured to host an explanation of the Royal Arch tracing board by the demonstration team of the Provincial Grand Stewards’ Chapter of West Lancashire No 8516 at Blackpool Masonic Hall. 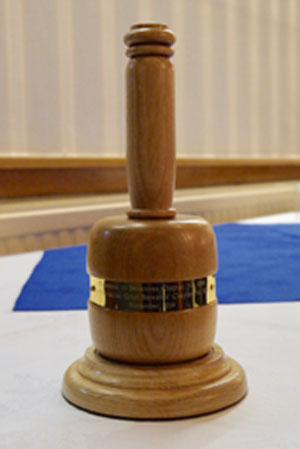 74 members and guests attended the meeting and lecture. The honoured guest at the meeting was Chris Butterfield as a representative of the Province along with other distinguished guests.

The team proceeded to deliver their presentation with the assistance of a projector and screen and the team members took turns to deliver the various sections of the lecture. Each section explained the various elements and symbols that appear on the board.

The principles of Freemasonry are communicated using symbols during our ceremonies and also by illustrated lectures. Lodges originally drew these symbols on the floor of the lodge and would wash them off afterwards. By the late 1700s floor cloths of various designs were being used

In 1845 John Harris, a Freemason and artist entered a competition organised by the Emulation Lodge of Improvement for artists to submit designs for tracing boards. John Harris won the competition with his series of designs including one for the Royal Arch.

Unfortunately, John Harris eventually became totally blind and in 1860 he and his wife moved into the Asylum for Worthy, Aged and Decayed Freemasons (which later became the Masonic Benevolent Institution) until his death in 1873.

At the conclusion of the lecture, first principal Duncan Smith thanked the demonstration team for a fascinating and informative talk. Afterwards the companions retired to the festive board.

Before the companions commenced dining, David Harrison presented a wooden gavel to Senatores Chapter of Installed First Principals on behalf of the Provincial Grand Stewards’ Chapter of West Lancashire hoping it would serve the chapter for many years to come.

David explained that the gavel was manufactured from three different types of wood to represent the number three which has great significance both in the Craft and the Royal Arch. In the Craft we have three degrees with three working tools associated with each, three principal officers, three great and three lesser lights, three tracing boards and many more examples

In his response to the toast to health, Chris Butterfield thanked the demonstration team for the presentation and continued to thank all the guests and the acting Provincial grand officers for their attendance.

The evening closed with the final toast from the Janitor

The next presentation of the Royal Arch Tracing Board will be at Carnforth Chapter No 4951 who meet at Kerneforde Hall, Carnforth, on Thursday 6th February 2020. The demonstration team coordinator is Chris Gleave, email; cfgleave@gmail.com