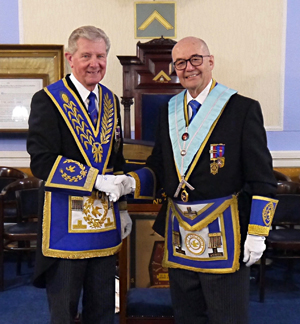 Once the business of the lodge had been dealt with, the director of ceremonies Chris Walpole announced that the lodge was pleased to receive Stuart Thornber as the representative of the Provincial Grand Master Tony Harrison. The Blackpool Group Chairman John Turpin and grand officer Peter Bentham accompanied Stuart and other distinguished guests along with acting Provincial grand officers Stuart Alcock-Williams and Gary Harper.

At the conclusion of the ceremony Stuart brought the congratulations of Tony Harrison to Graham wishing him a happy and healthy successful year in office.

Stuart thanked the lodge on behalf of the recipients for the generous donations. The brethren then retired to the festive board to enjoy a three-course meal and good company.

At the festive board Stuart responded to the toast to the health of the grand officers by adding his own congratulations to Graham and also to the brethren of the lodge, congratulating all those who took part in the ceremony. Thanking the group officers and his fellow grand officers for attending. With special thanks to the acting Provincial grand officers Stuart Alcock-Williams and Gary Harper for their support.

Stuart congratulated the lodge on attaining Vice Patronage of the Masonic Charitable Foundation 2021 Festival with their donation at the meeting. Stuart Urged the brethren who had not done so to take up patronage themselves by purchasing a festival jewel.

Harold Waggett accompanied by Jim Coupe sang the master’s song. Graham responded to the toast to the master by thanking the lodge and his guests for their support and he was looking forward to his year in office.

At the end of the evening the tyler of the lodge delivered the final toast.

Brethren enjoying the festive board.