Blackpool Temperance Lodge No 5303 was founded in 1931 during a revival of the Temperance Movement, being consecrated at the Marton Institute at Blackpool, which was also a temperance establishment serving non alcoholic drinks. The lodge maintained its principles of non alcoholic drinks during festive boards relying instead on jugs of orange juice to satisfy the thirst of the brethren for many years. 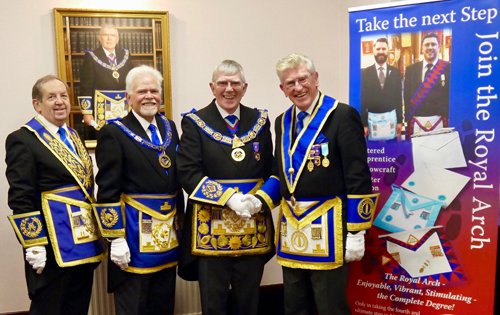 The evening’s festive board continued the tradition of having jugs of orange juice on the tables and instead of ‘taking wine’ with brethren, there was the ‘taking of orange juice’. The careful observer would have noticed a few bottles of wine around the room for those guests who were missing their fermented grape juice.

With calm confidence the WM of the lodge Umesh Dholakia commenced the proceedings by welcoming all the brethren to Temperance Lodge. On a report, Deputy Provincial Grand Director of Ceremonies Ian Hallsall announced that the PrGM stands without and demands admission. Tony entered the lodge accompanied by a pageantry of what seemed to be a never-ending parade of grand and acting Provincial grand officers. Umesh welcomed Tony to the lodge and offered him the gavel, which Tony politely returned as he wished to enjoy the ceremony.

Having been presented to the lodge by Martin Linton, master elect Martyn Jones re-affirmed his obligation and was duly installed into the chair of King Solomon in a most dignified manner by Umesh.

Martin Linton presented the Hall Stone Jewel to Martyn as the newly installed master. The Hall Stone Jewel commemorates the Freemasons who gave their lives during World War One. Only a few masters of lodges on the Fylde coast have earned the privileged of being able to wear it around their necks at all lodge meetings, including visiting other lodges.

Tony gave the ‘address the brethren’ of the lodge. The sentiments of it are relevant today as they have always been.

On conclusion of the ceremony Tony brought his personal greetings to Martyn hoping he would have good health to enjoy his year in office. Also congratulating Umesh as the installing master, thanking him for the work he has undertaken during his year in office and his quality of ritual today.

Martyn thanked Tony for his kind words and presented him with cheques to the impressive amount of £2,000. £1,500 to the MCF 2021 Festival, £100 to the Gary Parkinson Trust helping fight locked in syndrome, £100 to Red Marsh School for children with special needs, £100 to Foxton Centre for the homeless, £50 to Streetlife Trust Blackpool for the homeless, £100 to Blackpool Masonic Club and £50 to the Blackpool Museum of Freemasonry. Tony thanked the lodge brethren for their generosity.

Blackpool Group Chairman John Turpin responded on behalf of the grand officers congratulating Martyn and the officers of the lodge for a wonderful installation ceremony. Martyn replied by thanking John for his kind words wishing him a happy forthcoming retirement and hoping he and his fellow grand officers would join him at the festive board. Martyn also informed the lodge that today was John’s birthday. The full lodge resounded with the refrains of happy birthday. 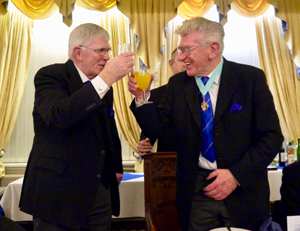 Tony and the multitude of grand and Provincial grand officers retired. The lodge being duly closed, the brethren retired to the festive board.

In his reply to the toast to his health, Tony congratulated Martyn on attaining the chair of Temperance Lodge stressing that it was important to enjoy the year, especially now that he is in better health. He also thanked Martyn for his work as a Regional Publicity Officer. Tony thanked all the grand officers for attending today, with special thanks to the acting Provincial grand officers for supporting him during their year of office.

The impressive donations given today will make a difference to the lives of many people and the lodge is now a Vice Patron of the Masonic Charitable Foundation.

After Harold Waggett sung the masters song accompanied by Jim Coupe, Martyn responded to the toast to his health by informing the guests that two years ago he was installed as the master of Temperance Lodge but due to ill health he was unable to perform the duties of a WM as well as he would have liked. Thankfully due to successful hip surgery he is now in good health and looking forward to an active year in office.

After thanking everybody who had taken part today, Martyn invited a surprised Tony to unveil something of interest. Martyn explained that during the development of the museum he had found a document of great Masonic importance hidden away for decades. It was one of the most significant documents in the history of the Province of West Lancashire. Tony removed the cover to reveal a framed document dated 22 December 1823. A date when six lodges in the Lancashire area rebelled against United Grand Lodge, the six lodges split away and formed their own Grand Lodge of Wigan. 26 Freemasons were expelled and their names are listed on the document. As a consequence of the rebellion the Province of Lancashire was split into the West and East Provinces of Lancashire.

Martyn thanked Tony for attending today and presented him with flowers for Maureen. Tony thanked Martyn for the beautiful flowers on behalf of Maureen saying that the hoped there would be no rebellion in the Harrison household tonight.

Brethren enjoying the festive board and jugs of orange juice.