Progress at the seaside

Progress Lodge No 4120 is the daughter lodge of Blackpool Lodge No 1476, taking its name from the motto on the Blackpool Coat of Arms, which is simply ‘Progress’ Progress is defined as ‘the movement towards a refined, improved, or otherwise desired state’ 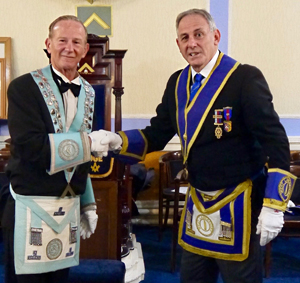 This was admirably achieved at the Progress Lodge installation ceremony that saw Michael Copley being installed into the chair of King Solomon for the fourth time.

Sadly, retiring worshipful master Gordon McClean was unable to attend the meeting so past master and secretary of the lodge Danny Whalley stepped up to the mark and acted as the installing master.

Danny offered the gavel to David who politely returned it requesting permission to enjoy the afternoon.

Master elect Michael Copley delivered a perfect rendition of the master elect’s obligation with the confidence that comes from years of experience as a past master of the lodge.

The quality of the ritual set the bar so high it would be difficult to emulate it in future years, thus inspiring the brethren of the lodge to aim for perfection. Michael looked proud to be installed in the chair of King Solomon by Danny.

Pictured from left to right are: David Randerson, Michael Copley and Danny Whalley.

All of the performances received the admiration of the brethren in the lodge room, the participants being under the guidance of director of ceremonies Andy Walch.

Once all of the ritual of the day had been completed, the happy task of appointing and investing the officers of the lodge began. As each officer was presented to the WM, Roy James entertained the brethren with appropriate accompaniments from his vast repertoire of music.

After the address to the brethren had been given by David, he rose again to bring the greetings of the Provincial Grand Master Tony Harrison, congratulating the WM and thanking the installing master for a wonderful afternoon.

After the proceedings had ended, the brethren retired to the festive board, the banter and joviality extending well into the late hours of the evening.

Interspersed with the official toasts was an inspiring speech given by David Randerson, promoting the joys of Freemasonry, the benefits of the Royal Arch and the gratitude of the recipients of the charity donations given this evening.

The highlight of the evening being the traditional master’s song, it was sung with perfection by George Embleton and enhanced by the musical dexterity of Roy James.

A musical perfect end to a harmonious perfect day.