The centenary year master of Great Marton Lodge No 3985, William (Billy) Grace opened the final lodge meeting of his year, performing his duties with care and a small amount of sadness. 50 brethren attended the installation meeting to witness Mathew Barrow installed into the chair of King Solomon by Billy Grace as the installing master. 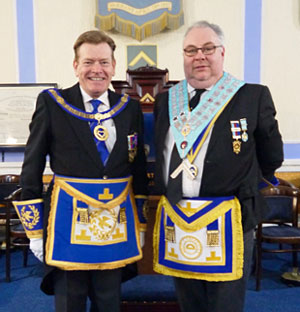 The honour of being the principal guest at the first installation meeting of Great Marton Lodge’s second century of existence fell to Assistant Provincial Grand Master Kevin Poynton. Kevin brings his own particular charm and wit to the proceedings, the humour being in full flow by the time of the festive board.

Opening the lodge, Billy dispensed with the general business of the day and then the director of ceremonies Paul Hunter announced that Assistant Provincial Grand Master Kevin Peter Poynton demanded admission.

Kevin was escorted into the lodge room by Paul, accompanied by Past Assistant Provincial Grand Master Terry Hudson, Blackpool Group Chairman John Turpin, grand officers Geoff Pritchard, Ian Ward and acting Provincial grand officers Jim Gregson and Jim Finnegan. Billy offered the gavel of the lodge to Kevin who politely returned it, thanking him and the brethren for the kind welcome.

After the installing officers had been escorted to their respective chairs, the job of being the presenting officer fell into the capable hands of Matthews’s father William Barrow. What could be a better honour than to present your own son to his lodge and peers?

After a fine installation ceremony and eloquent delivery of the working tools by Hugh Nelson, Antony Hill and Neil Houldsworth, Mathew proceeded to appoint and invest the officers of the lodge.

Once the installation ceremony had being concluded, Kevin rose and brought the congratulations of the Provincial Grand Master Tony Harrison, wishing Mathew health and happiness to enjoy his year. Continuing to thank Billy for the work done during his year as centenary master and this afternoon as installing master.

Kevin thanked the brethren for their fantastic donations, feeling proud that it all came from the pockets of Freemasons and their families adding that these donations today will make someone’s life just that little bit better. 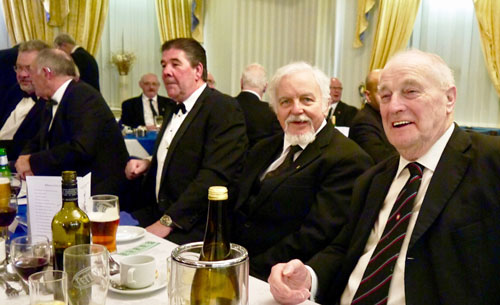 Guests enjoying the festive board and a small amount of wine.

At the festive board, Kevin responded to the toast to the grand officers by thanking all the grand officers who had attended today to support him. Reserving special thanks to John Turpin who is retiring as the Blackpool Group Chairman at Provincial Grand Lodge in April.

The Masonic charitable foundation will be grateful for the donations given today he said. Last year the MCF gave £48,000,000 to Masonic and non-Masonic beneficiaries. Freemasons also donated their free time to help others, visiting sick brethren, widows and helping people. Generally doing something for someone without receiving payment. This is time worth £5,000,000. Charity is not all about giving money, giving time is important as well.

Kevin congratulated all those who are receiving appointments and promotions in April at the Provincial Grand Lodge meeting and at the Provincial Grand Chapter meeting in October at Southport. Continuing the topic of Royal Arch Freemasonry, Kevin urged all those who had not yet joined the Royal Arch to consider it, as it is the next step in Freemasonry and completes the third degree.

Kevin concluded by thanking Mathew for a wonderful day, hoping he will enjoy his year as master of this fine old lodge.

In replying to the toast to his health, Mathew informed the guests that this is his second time in the chair of King Solomon and the first master of the second century of the existence of the lodge and he hoped to carry on the fine traditions and values formed in the first century. It will be a challenge he said, but everything is achievable. Mathew ended his toast by saying he is proud to be master of Great Marton Lodge.

The Tyler gave the last toast of the evening before the brethren retired to the bar or their journeys home.